Kevin Anderson is one of the tallest and most lethal tennis players on the ATP tour. The 6ft 8in 28-year-old reached a career-high ranking of 16th in October 2014. But Anderson, who was born in Cape Town, is predicted to climb higher. Anderson achieved this ranking through consistent play. This was particularly evident at the Grand Slams, where he made the second week at the Australian Open, French Open and Wimbledon. Although Anderson’s talents were always evident, it was in that 2014 campaign that he really managed to utilise his skills on a regular basis. He was thrashed by Rafael Nadal in the 2015 Australian Open fourth round but 2014 gives reason for optimism this season. With tennis players peaking at later ages in recent years, it is looking like Anderson is also about to come into his prime.

All Bets Are Officiated

Considering Anderson’s ascendency, it is a shame that South African fans are unable to bet on their home hero. Whilst South Africa has somewhat relented on its strict non-gambling policies of the 1960s, it still has restrictions regarding both online gambling and sports betting. Online betting is a booming industry and tennis is one of the most popular sports. That is why it is a shame that gambling supporters and fans cannot back Anderson or celebrate with any winnings from his success. 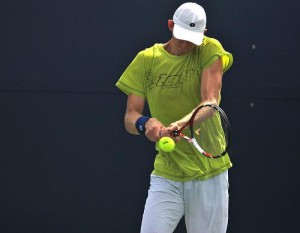 It All Began Down Under

Anderson began 2014 with a fourth round loss to Tomas Berdych at the Australian Open. This matched his result in 2013. After this good start to the season, Anderson made back-to-back ATP tour finals in Delray Beach and Acapulco. Although the big-serving Anderson lost to rising star Grigor Dimitrov and future US Open champion Marin Cilic in these finals, both were tightly fought contests. These demonstrated Anderson’s improved mental attitude. At the first Masters event of 2014, Indian Wells, Anderson lost an epic to Australian Open champion Stan Wawrinka. During this match, commentators noted the improved precision and consistency of the South African’s backhand.

A French Affair And A British Invasion

With professional golfer wife Kelsey O’Neal watching from the stands, Anderson ripped his way through the French Open draw to a second consecutive fourth round Grand Slam appearance. Although he lost in four sets to clay court specialist and former finalist David Ferrer, it was the second time in his career that Anderson had successfully defended Grand Slam points. At Wimbledon, Anderson reached yet another second week. This demonstrated that he was a triple threat on hard, clay and grass surfaces. Moreover, the man who stopped his Wimbledon campaign was none other then seven-time champion Roger Federer.

Although Anderson’s ranking continued to climb for the remainder of the season, he did have a disappointing US Open season. Ironically, Anderson lost his two most important matches to the two players who had stopped him from lifting a tour trophy that season. Dimitrov once again narrowly edged Anderson in Toronto whilst eventual champion Cilic beat him at the US open. However, despite these setbacks, Anderson still showed steady improvement and was only stopped by the elite of the ATP tour during this period. Whilst his huge serve can still develop hitches in tight moments, Anderson’s excellent movement and shot selection can still cause problems for the top players. That should remain the case for the future.